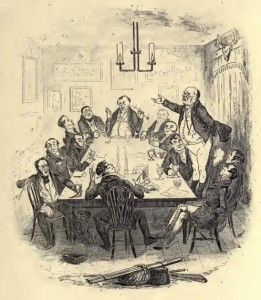 The portmanteaus and carpet-bags have been stowed away, and Mr. Weller and the guard are endeavouring to insinuate into the fore-boot a huge cod-fish several sizes too large for it— which is snugly packed up, in a long brown basket, with a layer of straw over the top, and which has been left to the last, in order that he may repose in safety on the half-dozen barrels of real native oysters, all the property of Mr. Pickwick, which have been arranged in regular order at the bottom of the receptacle. The interest displayed in Mr. Pickwick’s countenance is most intense, as Mr. Weller and the guard try to squeeze the cod-fish into the boot, first head first, and then tail first, and then top upward, and then bottom upward, and then side-ways, and then long-ways, all of which artifices the implacable cod-fish sturdily resists, until the guard accidentally hits him in the very middle of the basket, whereupon he suddenly disappears into the boot, and with him, the head and shoulders of the guard himself, who, not calculating upon so sudden a cessation of the passive resistance of the cod-fish, experiences a very unexpected shock, to the unsmotherable delight of all the porters and bystanders. Upon this, Mr. Pickwick smiles with great good-humour, and drawing a shilling from his waistcoat pocket, begs the guard, as he picks himself out of the boot, to drink his health in a glass of hot brandy-and-water; at which the guard smiles too, and Messrs. Snodgrass, Winkle, and Tupman, all smile in company. The guard and Mr. Weller disappear for five minutes, most probably to get the hot brandy-and-water, for they smell very strongly of it, when they return, the coachman mounts to the box, Mr. Weller jumps up behind, the Pickwickians pull their coats round their legs and their shawls over their noses, the helpers pull the horse-cloths off, the coachman shouts out a cheery ‘All right,’ and away they go.